Ok it's time for this soup. When I worked at the Magic Pan this soup was somewhat of a revelation. It's so good that it was one of those things on the Pan's menu that people came into have specifically. It was in essence a "hook" dish. You know one of those dishes that restaurants dream of having that people come in time and again as fans to savour.

Now if you have been reading my blog you will know that I have referenced the Magic Pan Restaurant before. But for those of you who have not been a brief story. 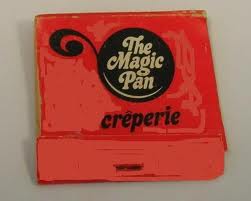 The Magic Pan was a restaurant chain started by a Hungarian Couple , the Fono's in San Francisco in the 1970's. The original concept had been an Austrian style crepe restaurant mostly with recipes from Mrs Fono's family background. There were Ham crepes and Spinach crepes and chocolate and Strawberry crepes for dessert.

The business expanded and was purchased by Quaker Oats in the 1980's. They took the concept expanded it to a french country kitchen concept and rolled it out across the nation. The center piece of each Magic Pan was the giant tile enclosed Crepe Wheel which spun around and cooked the crepes and other dishes while the customers looked on. I remember as a 12 year old being taken to the Pan and being just mesmorized by the giant cooking wheel of crepe goodness! It was one of the first "chain" restaurants in the country in a time when the US was just beginning to discover different foods. The Pan delivered that and at a decent price point. It was also a perfect time for a crepe restaurant as like fondue, crepes were all the rage in the 1970's. The thing that was interesting about the Pan looking back was that all of the food was cooked on site with real recipes. This required a staff of cooks to be behind the scenes at all the locations and was not a cheap way to do business. Amongst the many reasons for the demise of the chain was the rise of sit down restaurants like TGI Friday's and Applebee's that offered a full service bar and menu with a central commissary supplying the chain. This meant cost savings on site and guaranteed that that food was the same everywhere. Interestingly enough this concept was pioneered by Howard Johnson's, who with Jacque Pepin at the helm produced frozen entrees which could be uniformly served all over the US.

Eventually through falling revenues and customer base the Pan collapsed. Interestingly enough the last Pan to close was the Mclean Store where I worked. A testament to Sue the manager and eventual owner I understand, who ran a tight ship and kept it afloat!

Even as people turned away from the Magic Pan because of trends so today people are looking back and recognizing the value that the concept had  not only as a novelty but as a place and a culinary experience. Whether the scene of many a boozy lunch by the ladies of Mclean or candle lit dinners for couples in love in the evenings, the quiet elegance and french country charm enveloped the diner in a world beyond the Mall and beyond their own. Upon entering the Tyson's Pan one was struck by the charm and sophistication of the surroundings. The excellent service and of course the tasty and interesting food. Food which for the time was new, foreign, and different. Before food TV, Media, food blogs and the internet., Americans were new to many of the foods the Magic Pan was serving.
And many look back with fondness to the time and place they discovered those foods for the first time. The Magic Pan.

For me the Pan was a great place to work, filled with a fun and interesting cast of characters. I learned a lot form those folks. Many of them were full time employees, I was the summer help but we all got along and they welcomed me and Kai into the fold with open arms. Salty and Rough they were the workers who make this country great. They worked hard and they played hard. But as a group they were awesome to spend that summer with. And this was where I learned that food service comes with a healthy serving of humor, cause people are very funny when it comes to their eating habits and the things they say about food. For example a young couple came in and was obviously on a date. Trying to be proper and order for his date the young man announced to me that... "she will have the St. Jacques "Creepie" and I will have the Beef  and Mushroom "Creepie"", mispronouncing the word "crepe". Well as you can imagine it was hard to keep a straight face, and the crew referred to the crepes as "creepies" the rest of the summer. Lots of milelage from that one. Ah, but it's the little things that make life fun!

Now to the food. There were serveral dishes which made the Magic Pan famous and there are people who would disagree which were their favorites. There was of course the famous Potage St. Germain, or french country pea soup served with a dallop of sour cream and a mini decanter of Sherry wine. There was the Orange Almond salad. Amongst the crepes were the chicken and beef and seafood options and then there was the famous Monte Cristo Sandwich which to this day I have never had duplicated.                      ( Although I hear Bennigan's ripped off the recipe). Then there were the saute pans, with veal picatta and fettucini Carbonara         ( Still my favorite version ever). And lastly the desserts. All excellent washed down with the Pan's excellent Bloody Mary!

But today I can't think of another Pan recipe I would rather recreate than the famous Potage St. Germain. Now finding the exact recipe for this was very difficult indeed but I did find it. I got a copy of the original cooking manual and here it the recipe. If you try it you will enjoy it! Yum! So Enjoy ya'll.

Place ham bone in large pot.
Add water, chicken stock and peas and bring to a boil over medium heat. Reduce heat and simmer, stirring occasionally for 30 minutes.
Sauté the onions, carrots and celery just until limp.
Add them to the soup pot along with all the seasonings and continue to simmer until peas are very soft and mixture is thick—about 45 minutes.
Remove ham bone. Gradually stir in the milk and cream.
Add ham and chicken. Simmer, stirring occasionally, about 10 to 15 minutes.

Potage St. Germain soup should be served with a dollop of sour cream and a splash of sherry. The sherry was served on the side in a tiny glass pitcher, while the sour cream was placed in the bowl and dusted with chopped parsley.
Posted by The Underground Restaurant Chef at 8:26 AM